This blog was featured on Rolf Prima’s website & reshared here. The efforts outlined below are a partnership between Mahall Bikeworks, Rolf Prima & Cameron Sanders (AKA Renaissance Cyclist)… 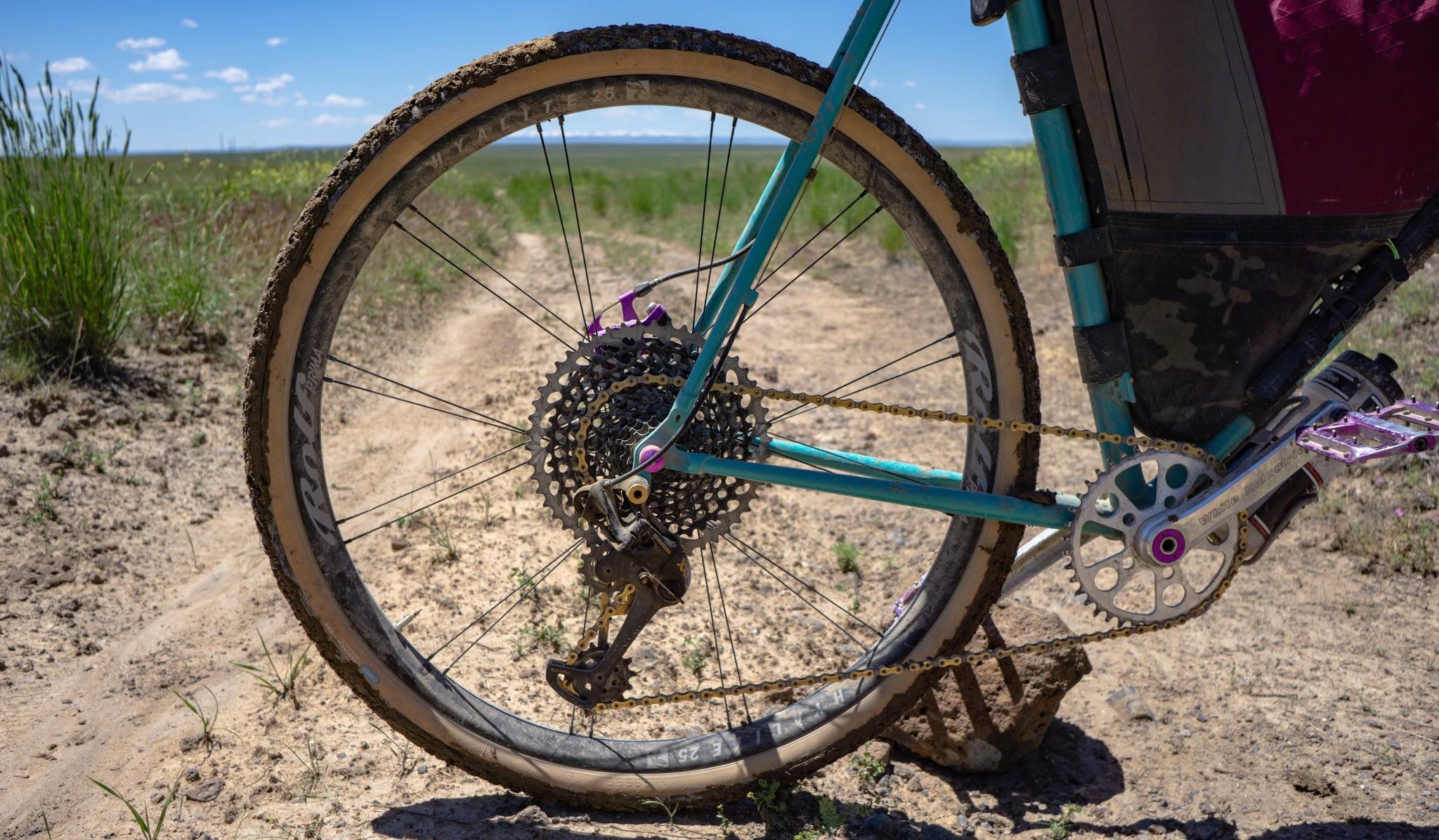 I’ve been cycling across Oregon’s rugged backcountry in search of stupid for some time now… Stupidly steep, stupidly technical, stupidly beautiful, stupid that somebody calls this a road, and stupid fun.

“Terrain that is more the idea of a gravel road than it is gravel or road. Most of the miles land in between challenging but never impassable; loaded with interesting vistas, dotted with livestock and wild animals, pitched at varying grades, and susceptible to the occasional rapid and dramatic change in weather. All of it runs through alpine forest, intermediate scrub, grassland, desert, and pasture that seems to spread off into the distance in every direction forever.”

When I first moved to Prairie City, Oregon (population 500) I was frustrated with the lack of singletrack. The nearest place to ride mountain bikes was Boise or Bend, each a 300 mile round trip away.

Desperate for backcountry riding, I got my hands on a map of the decommissioned US Forest Service roads in the Malheur National Forest. I quickly discovered I was sitting in one of the Nation’s greatest untapped treasure troves of cycling.

Eastern Oregon has tens of thousands of miles of gravel and natural surface “roads.” Most are now more like paths and cattle trails than anything else. Old ghost towns, timber sales, and mining sites dot the landscape and while the industries and its workers are long gone, the access to these places remain, connected by a seemingly endless network of decommissioned roadways.

I became obsessed with connecting them into rideable routes, slowly stitching them together with the most absurd terrain I could find. I was always on the hunt for some extra little piece of brain-candy here or there: a mine, an overlook, a change from brown dirt to red, a hotspring, a fire lookout tower you could sleep in. Some of these rides grew into Ride with GPS Ambassador Routes, now available to the public on their website.

It’s now been four years since my first forays into Eastern Oregon’s rugged backroads and they’ve changed my approach to cycling for good. These landscapes made a gravel believer out of me. Today my collection of multiday ambassador routes is substantial, and I’ve started plotting something absurd: a mega-route linking all my multiday routes together… A gravel odyssey to cap the climax. 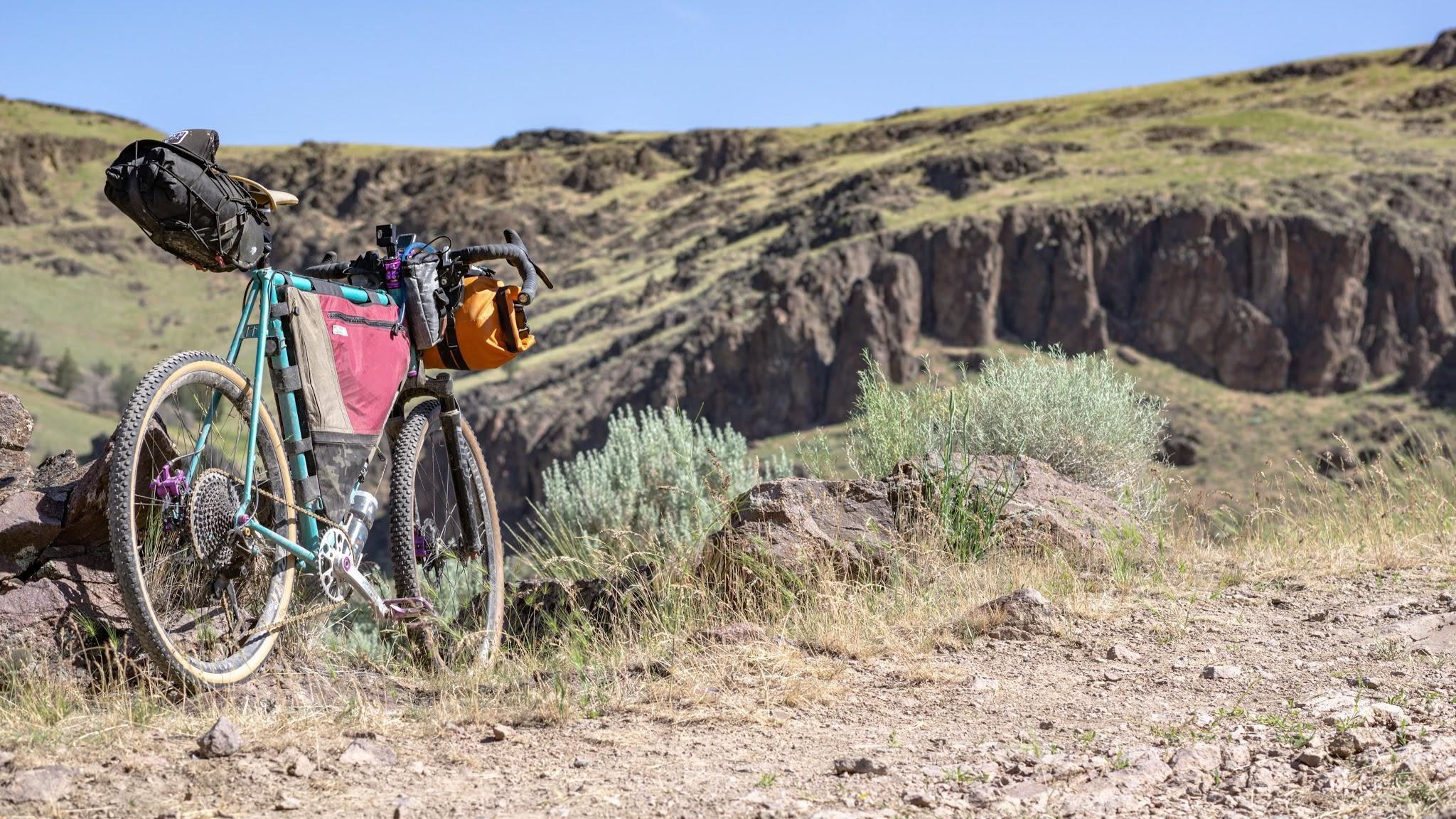 “A demanding, epic, amazing, scenic, tough, well-planned ride on the edge of nowhere.”

From Boise to Burns

I moved away from Oregon two years back to return to my first cycling love: Alaska, but I am still drawn to Eastern Oregon’s endless roughtrack. I’ve made a habit of returning each June to work on my gravel odyssey and attend the Skull 120 Gravel Grind, in Burns, OR.

This year I intended to knock out most of the missing pieces of my mega-route in one massive, 500 mile, 35,000 foot gain, 10-day push from Boise to Burns. Other than the roads leading out of Boise, the entire route traveled gravel perfectly suited for a lover of the absurd.

When we rolled out of Boise we had to carry every tool and calorie we would need for the journey. This expedition was to be completely self-sufficient. The only signs of civilization along the entire route would be two tiny gas stations. We would encounter these as we crossed the only paved roads we saw among the unending gravel, mountains, canyons, desert, and prairie. More difficult still was carrying the 13 liters of water needed to pass through the arid landscape. All said, my loaded Mahall Bikeworks gravel rig weighed in at 117 pounds. This would be the heaviest I’ve ever loaded a bike, and the hardest I’d ever pushed myself. 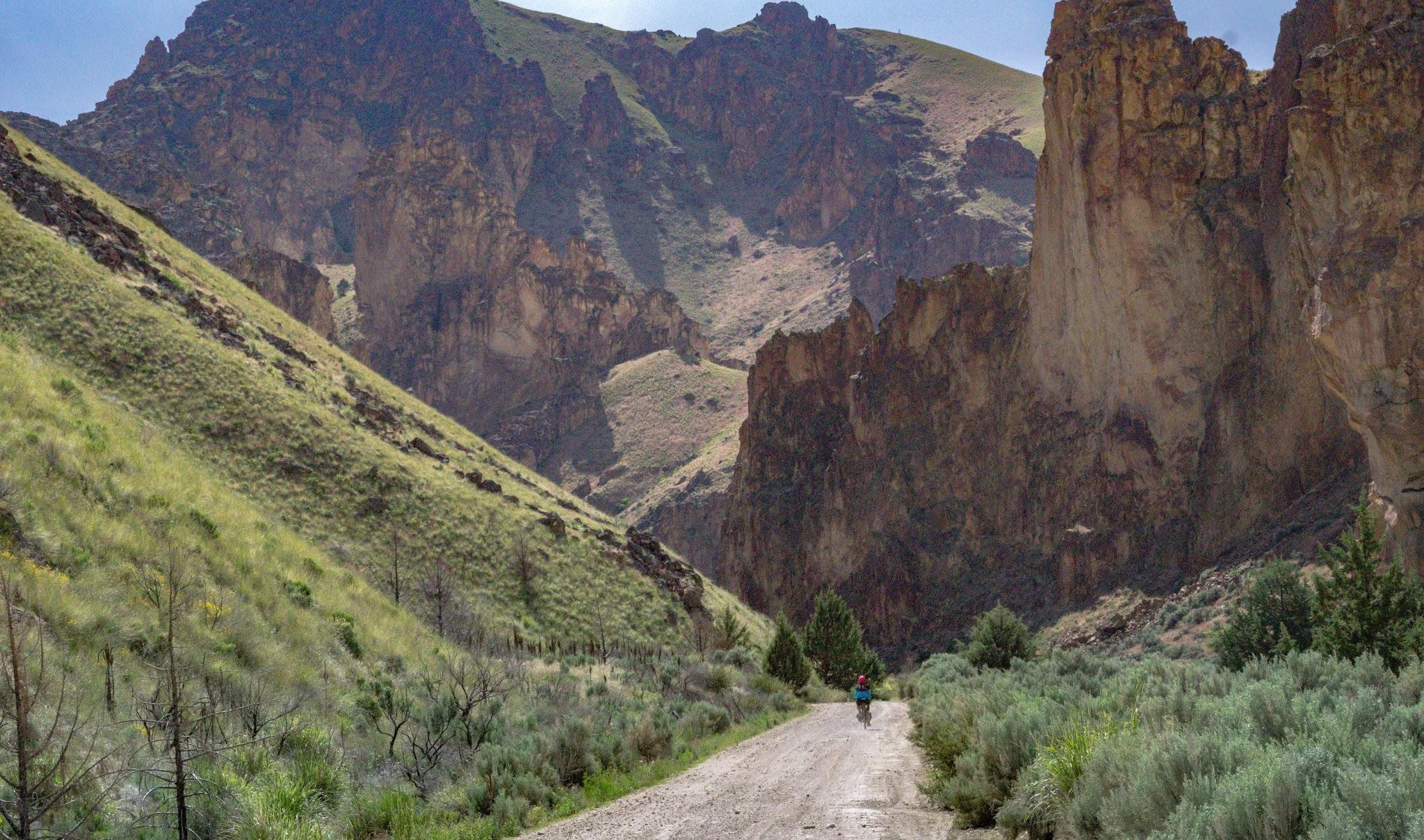 Entire days went by without seeing another human being. One of the few people we did meet was a rancher, named Kent. He didn’t mince words when we rolled onto his ranch:

“You’re a couple of damned fools. Nobody’s ever

pedal-biked across these lands. Damned fools is what you are.”

The landscape dished out all manner of weather: punishing heat, snow, wind and rain. The tracks were diverse in their brutality. They seemed to seek some fiendish way to puncture a tire or dent a rim at every turn. Alongside the hardships, in robust turnout were landscapes to boggle-the-mind. Every day I found myself muttering ‘this is the most amazing place I’ve ever ridden’.

As far as bikepacking route scouting expeditions are concerned, this trip was pure gold. It was as though our bikes had the Midas Touch. Every new direction led to exciting discoveries. And we never got shot at – not even once! While some may take that as a given, it has happened to me on more than one occasion. Public access easements across private land are common in this part of the world, making our route completely legal… But when nobody other than you or your family has stepped foot on the land in generations, such laws seem to be forgotten.

With this year’s adventure to Burns a monumental success, the completion of the Cap the Climax Stagecoach Odyssey feels closer than ever.

“Where the heck is Burns, Oregon, BTW, and how do you get there?”

Bikepacking on Only 24 Spokes!?

I started riding Rolf Prima wheels this spring with the Alsea+ 24 spoke paired midfat wheelset after my friend Mark Hall, owner of Mahall Bikeworks recommended the Rolf Prima line. I’ll admit I was more than a bit skeptical. My cycling focus has always been on bikepacking and deep backcountry exploration. I’m no weight weenie, and I push my gear hard. Given the remoteness of my adventures, I put durability as the top requirement of all my cycling purchases.

I’d found the Alsea+ to be a joy to ride, and incredibly robust, as I tested their mettle throughout the Spring, but they’d seen nothing as arduous as this journey. As my Oregon expedition approached, I was in need of gravel wheelset. Rolf Prima, sponsor of the Skull 120 offered some new gravel products for testing during my June expedition. I hesitantly agreed to tackle this already intimidating ride on the Hyalite 25 – a paired spoke 25mm internal gravel wheel designed with these sorts of adventures in mind.

My prior gravel wheelset was quite different. Heavy and robust, its high spoke count and weight gave me confidence in their strength, but added little to the joy of my ride. I was happy to shed some weight and roll a bit faster, but it was difficult to imagine how a 24 spoke gravel wheel could possibly meet the demands of a 117lbs gravel bike traveling over seemingly endless rock gardens and cattle track. Knowing that Rolf Prima hub internals are machined in the USA with titanium bits by Rolf Prima’s production partner – White Industries, one of my personal favorite brands – set my mind at ease hub-wise, but the spoke configuration still had me guessing. As we rolled into the hills outside of the Snake River Valley I was wondering what in the hell I had signed up for. My worries proved needless.

During the following ten days, I went from cringing and braking over every big rock to thoughtlessly barrelling down steep grades filled with nasty bits of potentially wheel-killing debris. The 650b platform mated with Rene Herse Juniper Ridge Endurance tread made for the most inspiring trip I had ever executed across these harrowing lands. Though my partner in this expedition would taco his 29er Nextie MTB 36 spoke rim riding the Skull 120 at the end of the trip, the Rolf Prima Hyalite 25 wheels stayed true and strong throughout the entire ordeal, and continue to ride flawlessly as of writing this. 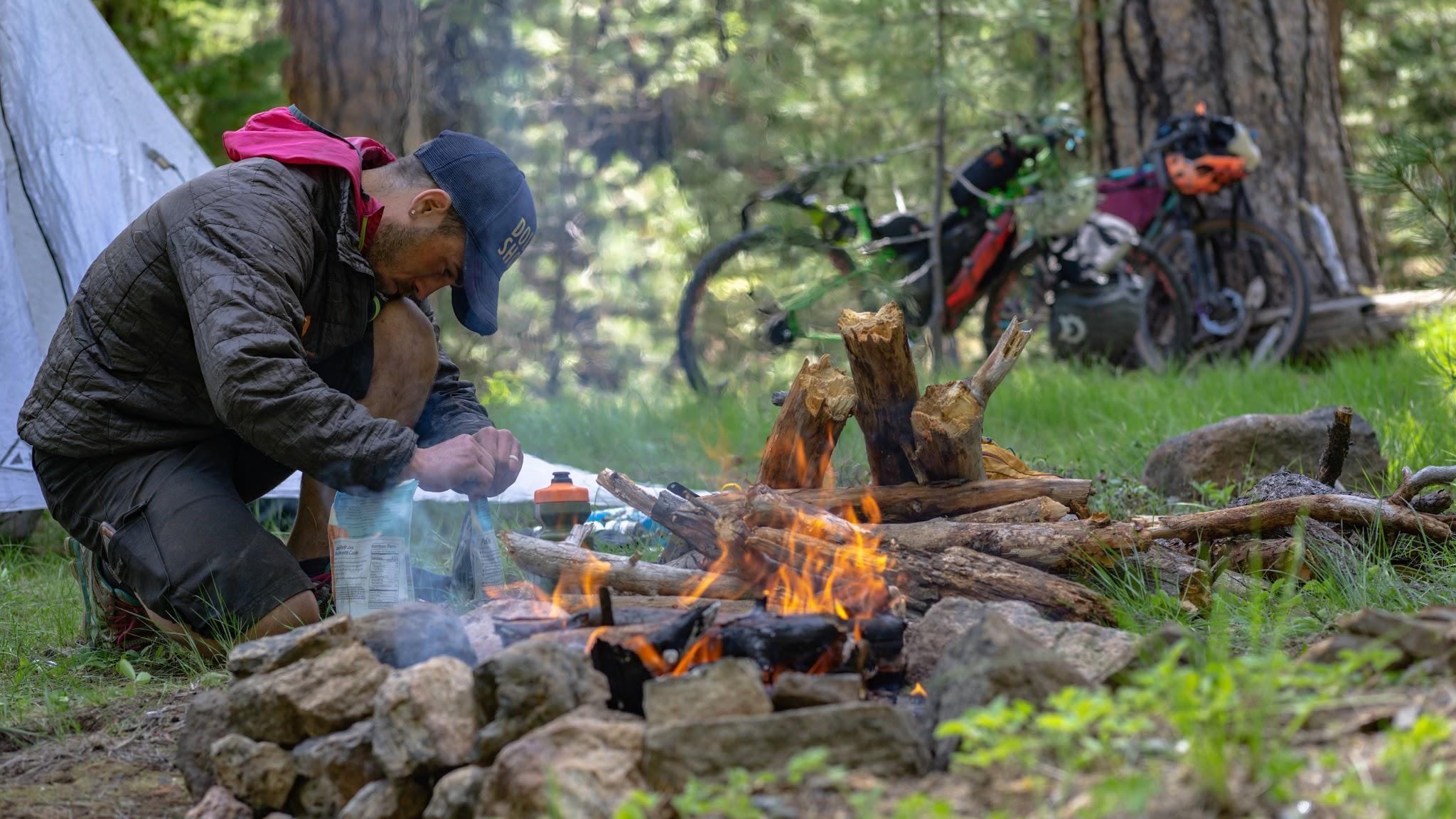 Just a few months ago I would have felt crazy saying it, but after what I put these wheels through, I now fully and unequivocally endorse the Rolf Prima 24 paired spoke technology. If the Hyalite 25 wheel can survive the punishing slog and brutal load I subjected it to, I have full faith that it will be a great wheel for anyone.

“An epic grind that will get you way out there to test your mettle. Difficulty: EXTREME.”